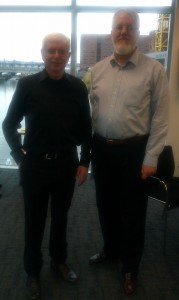 Last week I attended the Certified Scrum Master class with Jeff Sutherland, one of the inventors of Scrum, and founder of Scrum Inc.

Scrum is an agile methodology, used by about 10% of companies today, which produces astounding results compared to the old waterfall method. Jeff covered material from several Harvard Business Review articles that show how Scrum is a major improvement, and how it it works with “Lean”, just like the Yin and the Yang. I was reminded of my MSBA classes about 30 years ago, and realized how long ago it was that I was studying in business school. After this class, as a BizTalk architect/developer, I’m going to focus on using Scrum with BizTalk (integration software) development. The class had a good mix of project managers, team leads, and developers, and we broke into teams with a good mix of each. Lunch was even included. 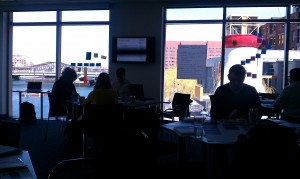 Showing stickies on the window and the milk bottle from the children’s museum outside.

Some of the specific “take-aways” were:
1) Create a base task size, and assign it a point value of 1, 3 or 5. Then estimate all tasks with points (based on the fibonacci sequence) in the future relative to that task (instead of estimated in hours). It has been proven that developers can NOT estimate man hours/days accurately, and that estimating points is more accurate.
2) Many teams double or quadruple their productivity, some even go hyper-productive with a 700% increase after several sprints.
3) Grooming the backlog is a critical and continual process, and it should be done by the entire sprint team, not just the product owner.
4) Technical debt (internal improvements) can be put on the backlog as tasks
5) The backlog contains user stories, but they should many and more atomic rather than one big massive user story. This allows specific items to actually be finished in a sprint. 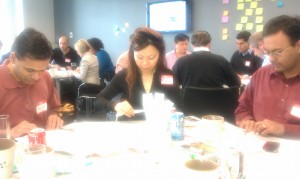 Although there is not time to build software in a two-day class, there was time to simulate three Scrum sprint sessions with our team. Instead of building software, we were instructed to build as many paper airplanes (that would fly 3 meters) as we could. The point was to demonstrate how the “velocity” improves with each Sprint, and how the team learns to work together.

The class was held at Open Ventures, on the east side of the river in the financial district, providing a fantastic view of part of Boston that I had not yet discovered. I would recommend Scrum to any company committed becoming more productive, and I would highly recommend this class to anyone in the IT profession.

Here is Jeff Sutherland giving a talk at a TEDx conference: