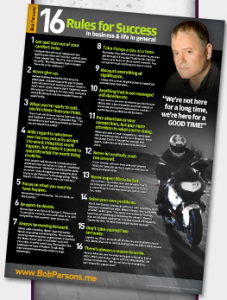 Bob Parson’s started several companies, including Parson’s Technology (which he sold to Intuit for millions), and he recently sold GoDaddy.com for .25 Billion. GoDaddy is an internet domain registrar, that now manages 35 million domains and has over 7 million customers. It sold its first domain name in the year 2000.

Bob has published his 16 rules of success (see link and permission to use at the bottom of this article).

Very seldom will the worst consequence be anywhere near as bad as a cloud of “undefined consequences.” My father would tell me early on, when I was struggling and losing my shirt trying to get Parsons Technology going, “Well, Robert, if it doesn’t work, they can’t eat you.”