What if you could remember everything? (Book Review of “Total Recall”) 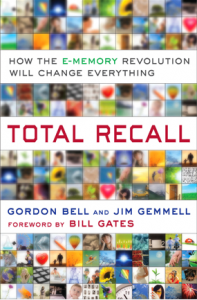 “Total Recall” is the concept that in today’s digital world, you can save and retrieve massive amounts of data. Gordon Bell and Jim Gemmell are both researchers at Microsoft. Gordon is putting all of his atom- and electron-based bits in his local Cyberspace. It is called by MyLifeBits and includes everything he has accumulated, written, photographed, presented, and owns (e.g. CDs).

I remember reading Negroponte’s “Being Digital” about 15 years ago, and now we are almost to the point of it being “totally” possible. In the picture of author Gordon Bell below, you can see two devices. 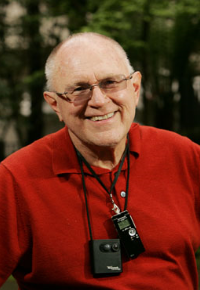 At least one of the devices around his neck is a camera that he prototyped, the SenseCam can take a picture as often as every 30 seconds. Imagine every time the scene changes, some walks into your presence, or you walk into a different room, a photo is saved to disk. Then, any time in the future, you can play back your day. One researcher wore the camera for three years, collecting over three million photos. Smart software sorts through the mundane, spotting and highlight the special and unusual shots for you.

In a somewhat related project, Deb Roy from MIT Media Lab wired up his house with microphones, to virtually record everything their son would hear, see, and say from birth to age three. This will be the first complete record of a human’s language development.

The 1945 Vision and What’s in Your Pocket Today

It is truly amazing that in 1945, a visionary by the name of Dr. Vannevar Bush, published an essay entitled “As We May Think.” In it, he predicted “a memex is a device in which an individual stores all his books, records, and communications, and which is mechanized so that it may be consulted with exceeding speed and flexibility”. He actually pictured a special desk with buttons and levers, but today, we all carry one of these in our pocket with complete access to WikiPedia, Google, etc… (our PDA/Cell-Phone).

“Total Recall” applies these concepts to learning as well. Students can already record lectures with a cheap pocket mp3 player. Eventually, why not just listen to the best professors in the world, rather than the professors at your locale? Actually, the authors said that they expect the role of the lecture to gradually diminish. “The replacement of lectures with hands-on experience led to a 10.8 percent grade improvement.” (p. 118) Bell and Gimmel also discuss the concept of the education portfolio, a collection of work chosen to represent a students interests and accomplishments. It could include essays, reports, presentations, videos, or any other media sample.

The authors claim that “it is a given that we all need to be lifelong learners” (p. 133). Bell himself says “unless one is constantly learning, one’s knowledge will quickly become obsolete.” (Incidentally, Bell is currently about 71 years old. He was hired by the founders of Digital Equipment Corporation [DEC] in the 1960s and was the VP of Engineering in charge of their most successful computer, the VAX.) Bell also stresses the importance of organizing, classifying and creating a taxonomy for all the material that you collect. He says that you cannot have a grasp on all this material unless you have a mental model or structure under which it is all “absorbed”.

Google Latitude - Geolocation Via Your Cellphone

Bell also suggests you begin recording your GPS locations. Since the book has come out, you can now sign-up with Google Latitude, and have your cell phone collect your whereabouts approximately every 15 minutes.  Did you ever think back, what year did we take that vacation to Mexico?  Now you GPS log can tell you.  Ideally, all your photos would also be tagged with geo-location.

As part of organizing your mass of information, time lines are recommended. Since reading the book, I have added a time-line to my resume, to show my first 30-years in the Information Technology world. How else can you quickly summarize what would be 5 boring pages of a resume?

What’s In It for You and Your Career?

The book has practical suggestions for products and a plan to get your own personal life and data digitized. Bell has digitized all his papers, books, files, photos, albums, and even has a recommendation for details such as how to name your files.  Of course, he talks about the “Big-Brother” and ethical aspect of having so much information available.

As people collect and develop all this data, the problem arises of how to judge what a person really knows, and how they can apply what they know to a real-world project. That is what we are solving at Olexe.com.