I was totally blown away by Brendon’s four day conference in Santa Clara (September 2013).  Brendon certainly over delivers.  I estimate there were 1200 people in the room, paying $2000 each to be there.  Do the math… that’s $2.4 million.  Even if 1/2 that money was paid out in affiliate commissions, that a nice income for a four day event.  Of course, Brendon has been studying leadership, psychology, speaking, and training for at least 15 years.  With 1200 people there, Brendon remained the behind-the-stage star except for the 40 or so VIP’s who paid an extra $997 to be on the front row and have lunch with him. Brendon actually has 5 or 6 different business that earn him to make over $10 million per year and 17 weeks of vacation. 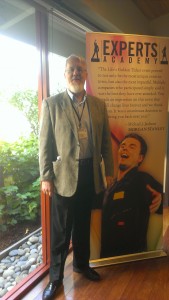 Brendon’s teaching focuses on creating information products that could be based on eBooks, physical books, teleseminars, webinars, audio programs, membership sites, speaking, giving seminars, online courses, home-study courses, and coaching.   He shows the four mandates of positioning, packaging, promoting, and partnering to help experts to share their message using the above mediums.

As Brendon says, “You never know who will show up at Experts Academy.”  Guest speakers included Marie Forleo (Rich Happy and Hot B-School), Charlene Johnson (you might have seen her info-commercials for TurboFire), Jeff Walker (Product Launch Formula), and spiritual teacher, six-time New York Times best selling author, and lecturer Marianne Williams. Publisher and literary agents Rick Frischman and Scott Hoffman were there to help those interested in creating their own best sellers.

Practical benefits included the group exercises.  After each major teaching concept, we broke into groups of four or five, and put the teaching into immediate action and got great feedback from our fellow students.  For example, we outlined our mission statements and practiced them.  One exercise involved understanding the clients struggles.  Later we developed a sales video outline, and did a practice rehearsal.  People were there to network and to help each other, unlike any conference I’ve ever attended.

If you want to see a free video from Brendon Burchard, use this link: See Free Video.  Brendon only releases his systems for sell once or twice a year.  Even though I highly recommend the conference, you don’t have to go to the conference to benefit.  Experts Academy includes an online portal and a big bulky box including his book, DVDs, Audio CDs, and class materials.