Over the weekend, I convert over 800 notes from Phatnotes to Evernote.  I originally used Phatnotes (from a company called Phatware) to sync notes from my PC to my old windows-mobile phone.  When I switched to Blackberry, I gave up and did without the notes on my phone.  But now that I have an Android phone, I decided to give Evernote a try. 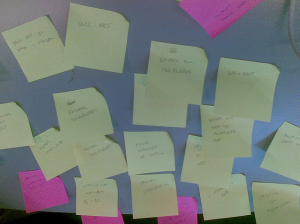 I like the cloud-based, anywhere access concept.  The only problem I’m having so far, is some of the limitations of their searches (for example, if you have a note with “ABCXYZ Corporation” they won’t find it if you type in “XYZ”, you have to type ABC* or corporation or something else.

Originally, years back, I moved all my Microsoft Outlook notes to Phatnotes.  I was using notes for a replacement for the yellow-sticky style notes that many of us keep around the office.  But sticky notes pile up too fast, you cannot sort or search them, and you can’t carry them with you everywhere.

Getting from Phatnotes to Evernote was a bit of a challenge.  Fortunately, since I’m a programmer, I created a Python program to do the conversion.  First I exported from Phatnotes to their .CSV format (one export per database).  Then I wrote a Python program to convert the .csv (the acronym stands for “comma separated value”) file to Evernotes published .ENEX format.  ENEX apparently stands for EverNote Export, but they allow you to export and import from this format, at least on the Windows version of their tool.

I decided to share the program and procedure with the world, my first “open source” project, at http://ConvertMyNotes.CodePlex.com.