Last week, I had a little fun researching crop circles (better called “crop formations” because they are not all circular).  I find their shapes mysterious and hypnotic. 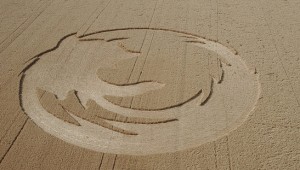 commission to create a crop circle for you.   The Firefox man-made crop circle was 220 feet in diameter and took under 2 weeks to plan, it was completed in 2 days by 12 students at Oregon State University.  They had considered hiring a professional company in the UK to do it, but the cost was prohibitive.

Now, consider the one shown to the right, along with hundreds of others. 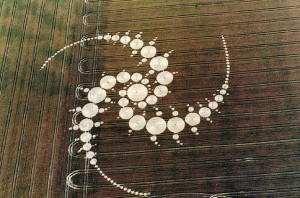 They typically appear overnight!   Even if you were to reproduce this on a computer or drafting paper without scanning it or tracing it, how long would it take you? It costs about $45 to get my yard mowed.  If I asked them to do this, what do you think they would charge? And what engineers and computers would be required?

I have no idea why they occur or what they mean, but if they are all hoaxes, then some people have way too much time on their hands.

Here are YouTube videos showing two of the opposing sides. The first, show some skeptics demonstrating how to make a crop circle by hand:

Follow the above to YouTube if you want to see the testimony of the “techie” camera guy, and learn about the cameras he used (note: Brit’s call grain “corn”).