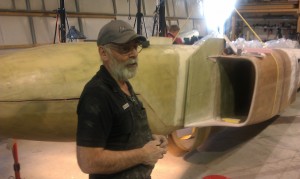 In Calgary, Alberta, a group of volunteers gathers every Tuesday night in a private hanger to build a build a 2/3 scale piloted replica of the CF-105 Avro Arrow (within the limits of Canadian recreational aircraft legislation).

The original Arrow was one, if not “the”, most advanced aircraft in its day.  However, its cancellation was announced on 20 February 1959. The day became known as “Black Friday” in the Canadian aviation industry.

The group registered as a non-profit in 1997, and has put in over 8000 man-hours in the project so far.  Volunteers of all types are needed.  More information can be found at their website: http://avromuseum.com.

Photo from the Canadian Department of National Defence

Wikipedia describes the aircraft as follows: The Avro Canada CF-105 Arrow was a delta-winged interceptor aircraft, designed and built by Avro Aircraft Limited (Canada) in Malton, Ontario, Canada, as the culmination of a design study that began in 1953. Considered to be both an advanced technical and aerodynamic achievement for the Canadian aviation industry, the CF-105 held the promise of Mach 2 speeds at altitudes exceeding 50,000 ft (15,000 m), and was intended to serve as the Royal Canadian Air Force’s primary interceptor in the 1960s and beyond.