I bought a ViewSonic GTablet from Woot for about $235, and found these instructions to upgrade GTablet to Honeycomb edition of Android operating system.  For a newbie to this hardware, it was a little like brain surgery, but I got it done in about 2-3 hours; works great except as he warns, the camera doesn’t work.  But it is about 1/2 price of the Samsung Galaxy.

So for the first time, I played Angry Birds, and that was cool on the bigger screen, but I found the game “Osmos” which has totally addicted me. An hour or two can go by, with no hunger or anything.

It has numerous variations, with my favorite being “Impasse”.  The orientation games basically touch you that you are the blue/white shape, and if you eat another blue shape, you grow bigger.  If you bump a red shape, it will start to eat you; but in some case you can still escape.  You move by touching the screen, and part of your contents, or self, is ejected, propelling you forward.  You soon learn that you have to use your ejections to move around other objects, based on their size. 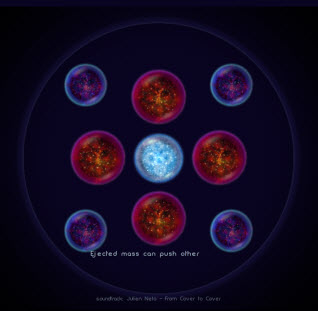 When I first saw the above screen, I thought it was impossible. If I’m the shape in the middle, how can I go absorb any of the blue shapes on corners?

You start by ejecting some mass to the right, and then to the left, and repeat. 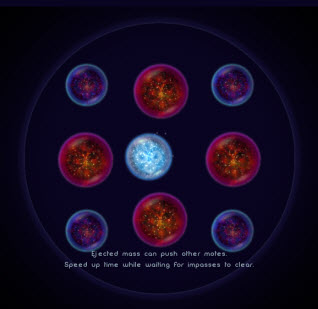 The red cells on the left and right will slowly start to move, opening you a passage way. 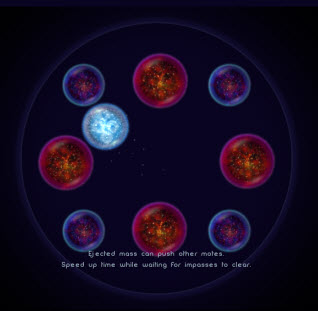 Then as soon you absorb the first blue cell, you are bigger than all the others, and the other change to a blue around red to show that they are now “potential food.” 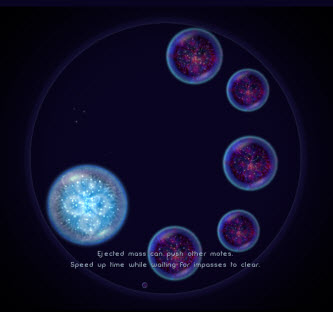 After Level 1, of course it gets harder.  You have more red guys to avoid, and they introduce anti-matter which instead of “eating” you, cancels you out.  If, for example, you were 25 grams, and you hit an antimatter of 10 grams, it would shrink you down to 15 grams.

Level 8 took me about 6-8 hours, and that’s why I say that I’m addicted.  I haven’t played any game that long in years.  The screen and the music is very hypnotic, organic, and almost peaceful.

Other variations of the games seem more like solar systems than cells, where gravity can have an impact.  In Impasse, you cause most of the movement, but it seems to grow and multiply and have a life of its own after time passes.  (And by the way, you can speed up and slow down time with a stroke of the finger).

If Level 1 looked tricky at first, take a look at Level 8. 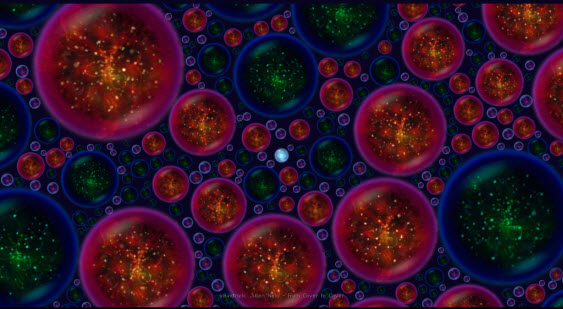 Yes, the little blue/white moon looking dot in the middle is you!  You can use the pinch touch-motion to zoom in and out. It seems impossible, but you have to think backwards, and your ejecta very carefully, to a) not shoot potential food, b) slowly cause the red guys and the antimatter (green guys) to cancel each other out, and c) think ahead of how to create future food (when the red guys are being absorbed into another red guy, or an antimatter), when they get smaller than you, they turn blue, and you can eat them.